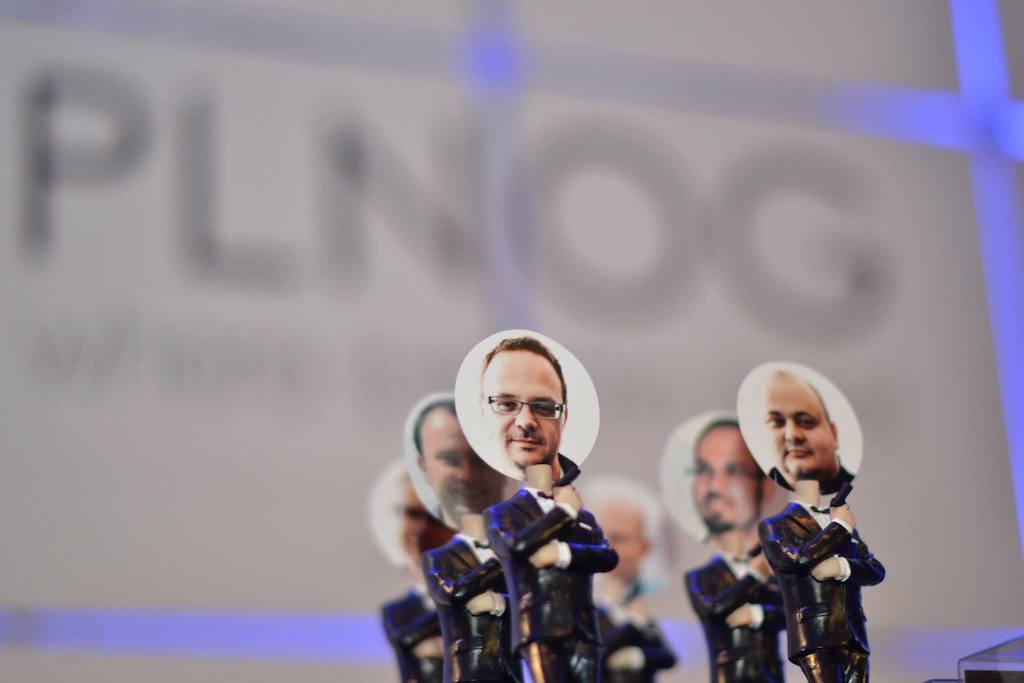 from the beginning we knew it may be hard, but we can make it. ’let’s target 60 people!’ was the second decision after we agreed to ‘do this’ and create PLNOG. 124 of you showed up. i don’t really remember all of the things that happened that day. and that was only 10 years ago! i remember only the fact, that we couldn’t fit you in one of the Cracows Wawel room that Andrzejs team was able to secure for this experiment. i remember i was worried that ‘people won’t come back’ after this, and Andrew was calming me down - as he usually does.

there were also happy and spontaneous moments, like with the pink t-shirt photo opportunity (if you don’t know what i’m talking about… you shouldn’t know anything about it ;) ). but in reality, all of the first editions were major challenge for us and PROIDEA team that did orchestrate everything up to the last finishing touches. we’ve spent enormous amount of time discussing in groups and over emails just to make things right how we wanted them to be. how’s agenda? why we’re not getting enough interesting submissions? whom of the speakers we can help to polish presentation and presentation skills? how many tracks we should plan? who should get the speaking slots? will they really come? why they didn’t yet sent the proper font? they really decided they want surveys on the stand? now?

i don’t even want to think about it how many different challenges were in front of Andrews, then Jacob and recently Monica.

right from the start we thought about extending the idea behind borders. we created something that could have been european NOG - EuroNOG (or EUNOG - just for a moment). we did two of them, one next to PLNOG to ease the transition for abroad travellers, and then second one. unfortunately, that didn’t work - too much work, and RIPE decided to start east NOG via ENOGa. that makes sense, and i believe if nothing better came out of it - RIPE finally decided to do something apart from it’s own meetings.

for me those twenty PLNOG editions meant going at Cisco through system engineer position, to IP NGN manager, then CTO for Cisco Poland, then to Regional Sales Manager for SPs, Enterprise and Public Sector markets and then back again to CTO. in the meantime, our service provider market became much more price sensitive and focused on driving the costs down. discussions right now focus on port costs, OTT feasibility and technology is developing like crazy compared to 2008. we’re looking with more interest at services right now than on the infrastructure that delivers them. on the other hand in world that meant to be managed by SDN unicorns - infrastructure itself becomes critical itself.

i did present on most of the PLNOG editions. unfortunately i couldn’t take part in some of them - two or three. i did miss our community and knowledge that you’re having geeky fun out there wasn’t helping me out :) over the years i covered a lot of technologies - security, traffic engineering, multicast, hardware architectures, LISP, BGP and even about future of networking.

on this edition of PLNOG, my session was about information exchange in peer to peer and blockchain networks. state of things is miserable, but thanks to that - every network engineer can show his/her skills and help developers build solutions based on experience. and avoid wasting time on reinventing wheel.

after those twenty editions i can say one thing for sure - wise people that gather in one place with open minds can create wonderful things. i was there to witness that, and i hope that there will be no shortage of passion and willingness to pass over knowledge and best practices to younger ones. omg, i really wrote that.

have a good week!