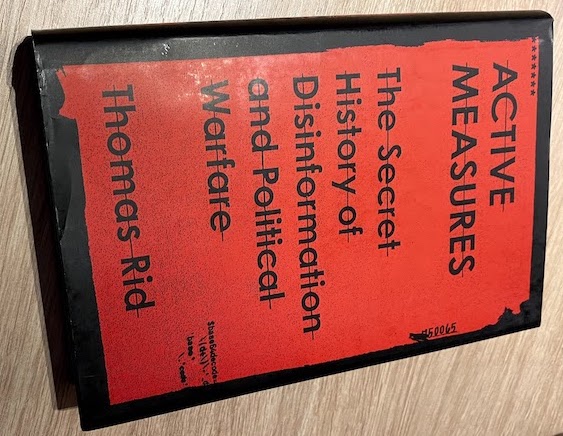 I recently had a chance to finish reading fantastic book covering disinformation war happening between USSR and USA during Cold War - Active Measures. it’s frightening how Soviet Russia, and by extension todays Russia, mastered skill of disinformation and manipulation of public opinion. and at the same time, reading it helps you spot influence over todays anti- and pro- movements, like antivacciners, anti-5G, anti-whatever. i’m not saying they’re all inspired and sponsored by Russia (or by whomever), but after reading this book you can easy see into how those movements start, evolve and get exploited. it’s just so easy to spark doubt in uneducated minds, and then let them consume “verified facts” and “in the internets”.

the book is written with a great deal of care for facts and supporting them with quotes (footnotes are amazing, worth burying into them alone - more on that later). it, of course, pictures Americans as cautious and often just a bit careless, while their Soviet adversaries - ruthless, well-financed and unscrupulous (moral above all). it is hard to believe, of course, because the stories presented in other books - those about CIA activities (for example great Legacy of Ashes I was already writing about some time ago), show more accurate and varied picture. it’s that Americans just tended to bet on the suprisingly effective financial influence (i.e. capitalism), and only when that didn’t help - “direct action.”. the Soviets, on the other hand, mastered to perfection (as you will learn from the book) the control of entire masses, politicians, ex-NATO generals or even entire “peace” movements so as to “turn them up” properly (the story of “holy indignation” at the Americans and the neutron bomb) or appropriately funded (contacts with trade unions in the USA).

Soviets' direct actions over the past two decades include:

interestingly, the Russians had to push into Syria almost by force because even when threatened, al-Assad preferred to seek military aid from Iran rather than pay the Russians for anything. Putin first had to cancel over $ 600 million in debt and then offer the new surface-to-air weapons for free for Assad to agree for “help” to bomb Syria and its citizens in the bloody civil war. but of course, to the despair of the Russians, he is not going to pay those debts.

anyway, the Russians settled in Syria for good and set up a regular training ground there. at the same time it is clearly visible that the economic crisis is taking its toll on Putin. first, most air attacks on militarily critical targets like hospitals is carried out during the day (GLONASS has recently failed, which is not surprising either). second, usually with the use of unguided rockets (air-to-surface weapon more expensive only than the gun bullets), instead of “smart bombs” (by the way, a terrible name) - that is, laser-guided bombs. thirdly - it seems that while the equipment that the Russians use in Syria comes from the best regiments available in the country, the personnel is heavily rotated to “have the opportunity” to practice, because according to various information and estimates, Russian pilots now have the opportunity to fly between only two and eight hours a month. it’s not even enough for basic training, let alone practicing as a professional pilot. interestingly enough, Russians sent their the latest Su-57 but… without full suite of electronics and it’s “stealth” equipment. this is nothing new, because since the collapse of the Soviet Union, Russia cannot afford a thorough electronic modernization of its existing strategic assets, let alone building new advanced aircraft, while admittely it remains a nuclear power. on this matter it is worth looking at the monograph by Piotr Butowski, but also at the excellent, albeit short, monograph on the conflict in Syria and Russia’s participation in Tom Cooper’s book Moscow’s Game of Poker.

and that led me to the second book. after “Active Measures” I began to dig in CIA FOIA archive - more specifically the so-called “Reading Room”, to see what it has to say about spies, the Cold War and paper propaganda scuffles from the years of the divided Berlin. there’s a lot of the material collected there on the Cold War, including the plans of the Warsaw Pact to wage war in Europe and other fronts. this also includes so called NIE - National Intelligence Estimates.

over time, of course, looking for information about the intelligence war began gave way to researching information about Polish airports, aviation, the size of the army before and after mobilization and our war plans (including the concept and specific plans of the Polish army’s attack through northern Germany on Denmark and sea landing). by the way, I found a lot of interesting documents about Polish military surface-to-air-missile (SAM) locations. interestingly, it is not only possible to find their remains in today’s Google Earth / Maps, but also by digging further, find SAM positions identified in the former Soviet Union itself.

and so started my renewed interest in Google Maps, Google Earth and CIA archives.

in this document, you can find following summary done at the end of 1968 year: 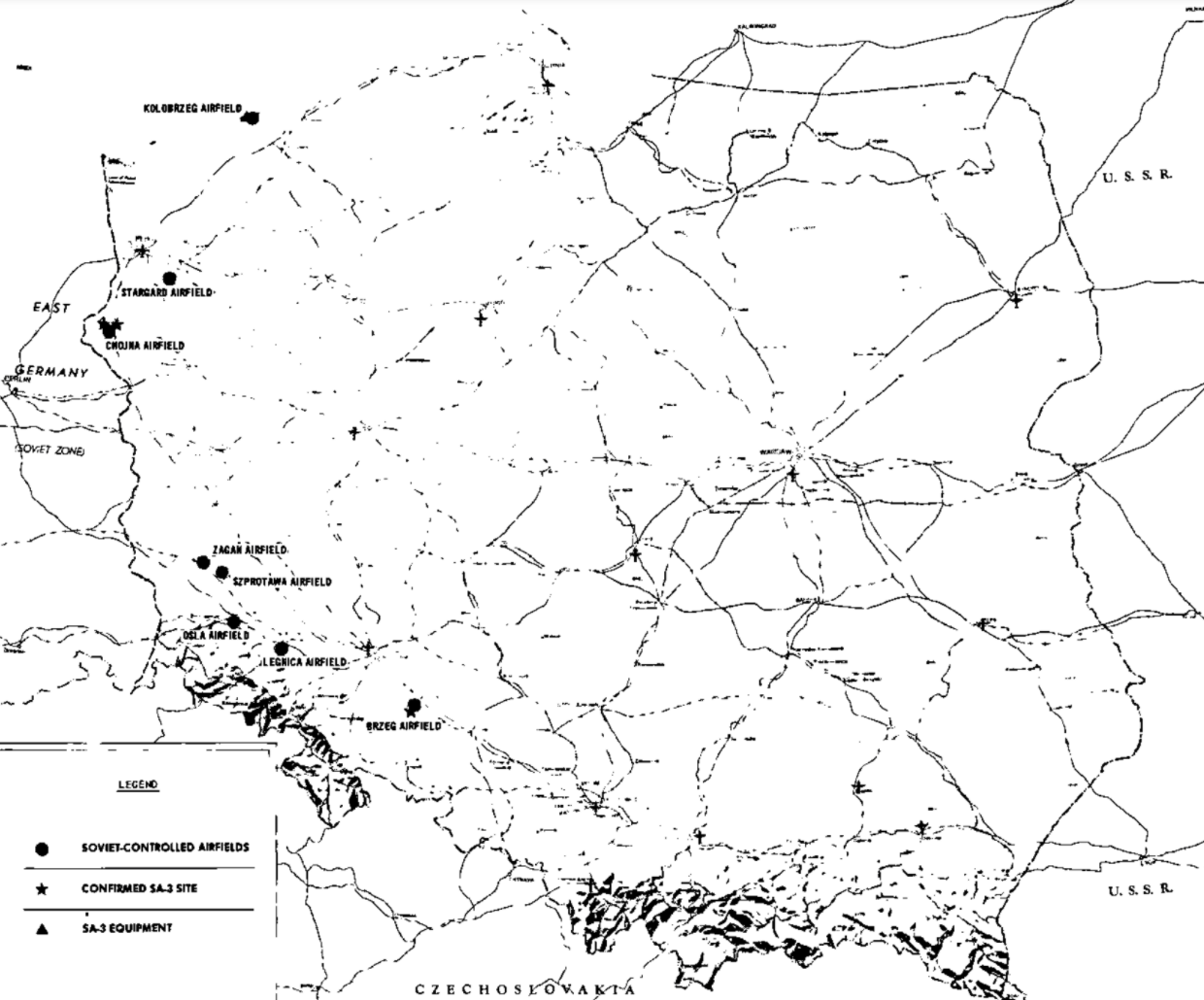 you can also find traces of missile units existing until recently - here, for example, we have the SA-2/SA-5 launcher located in former Eastern Germany, whose characteristic location can still be found in fresh satellite photos: 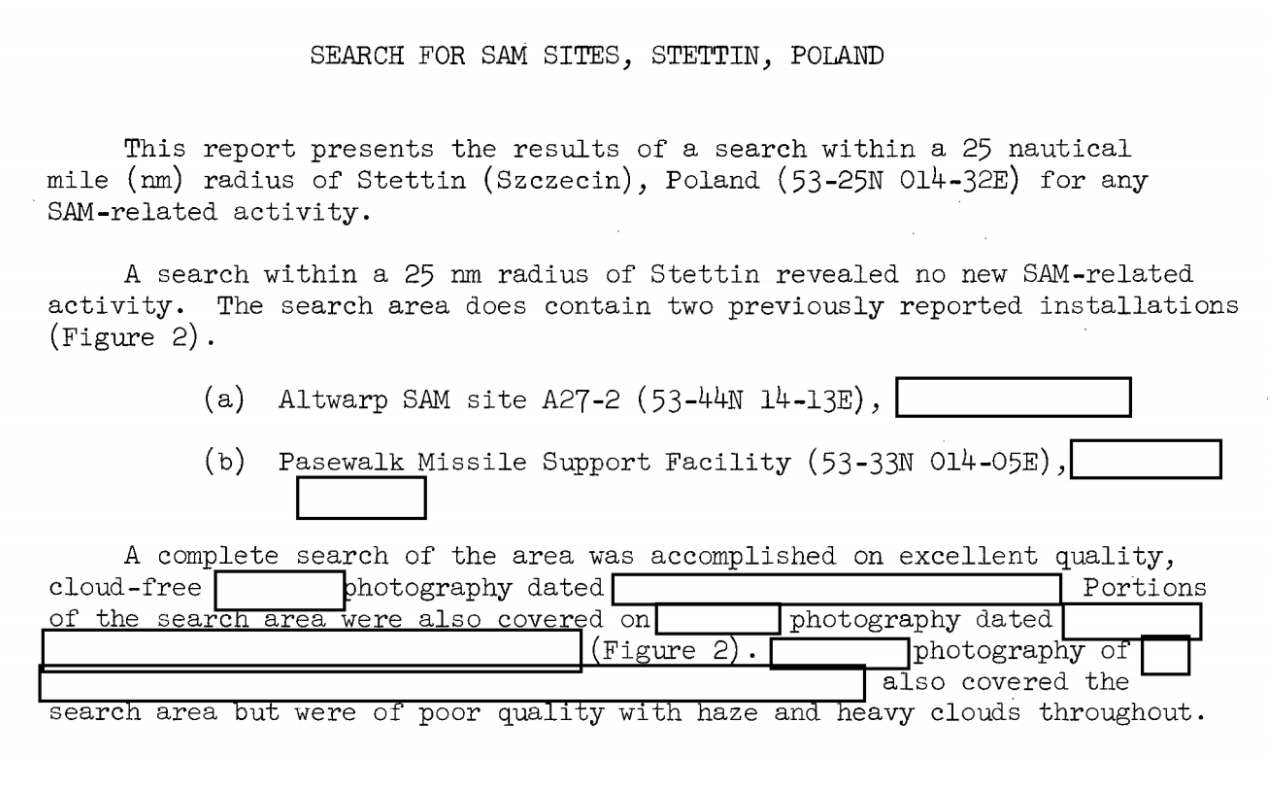 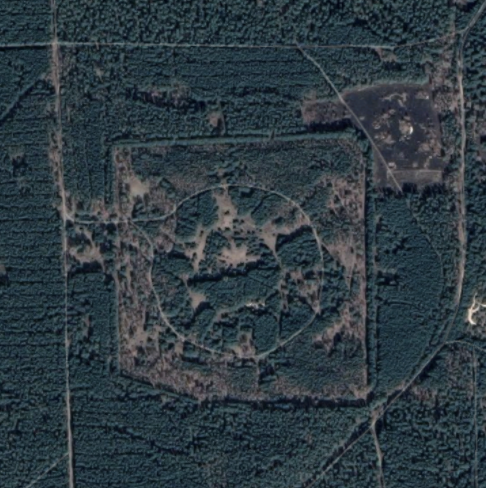 coming back to Syria for a moment - next document is dated 1983 and covers photographic reconnaissance. as you can see, it was used until recently and it looks almost ready for immediate use: 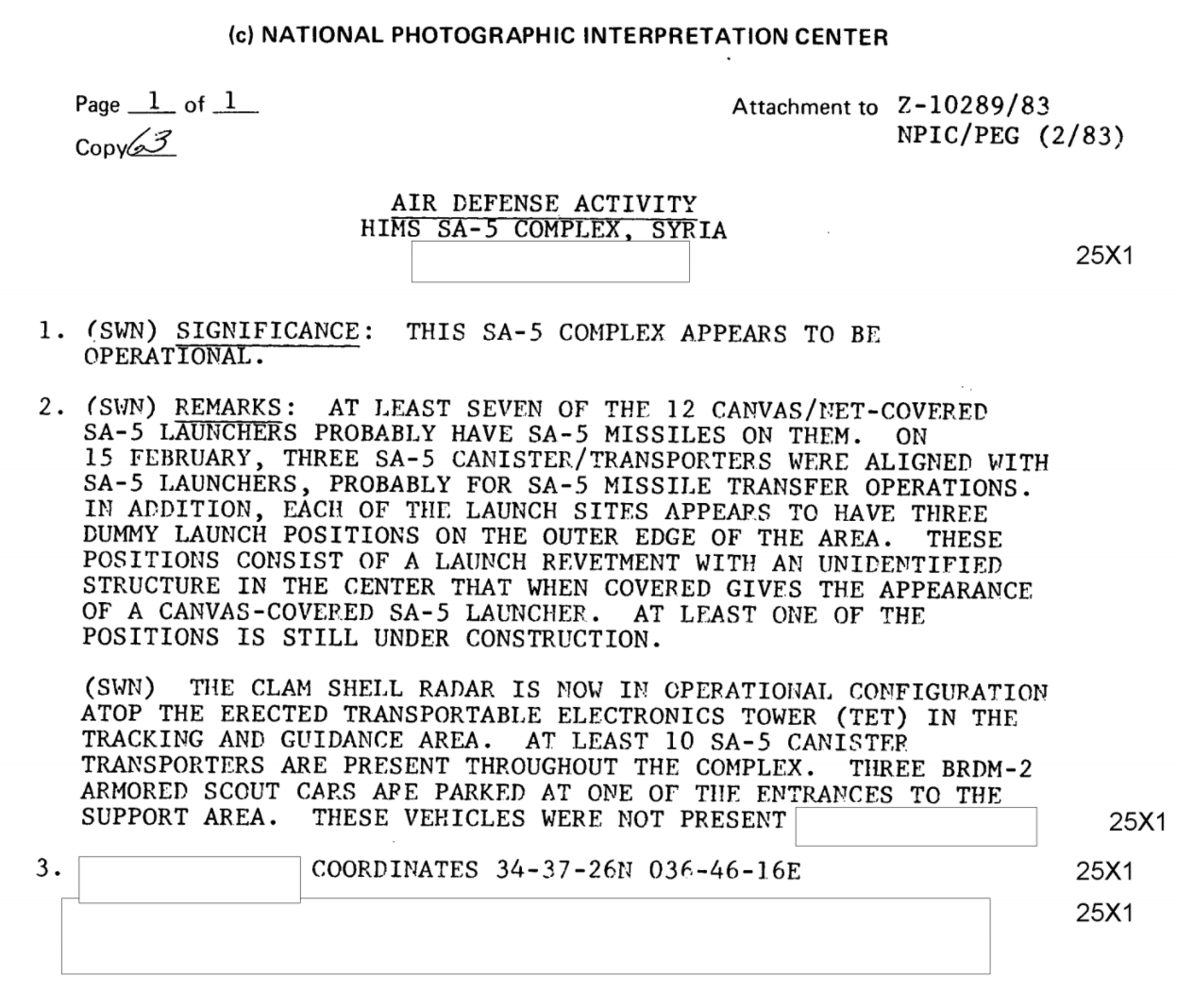 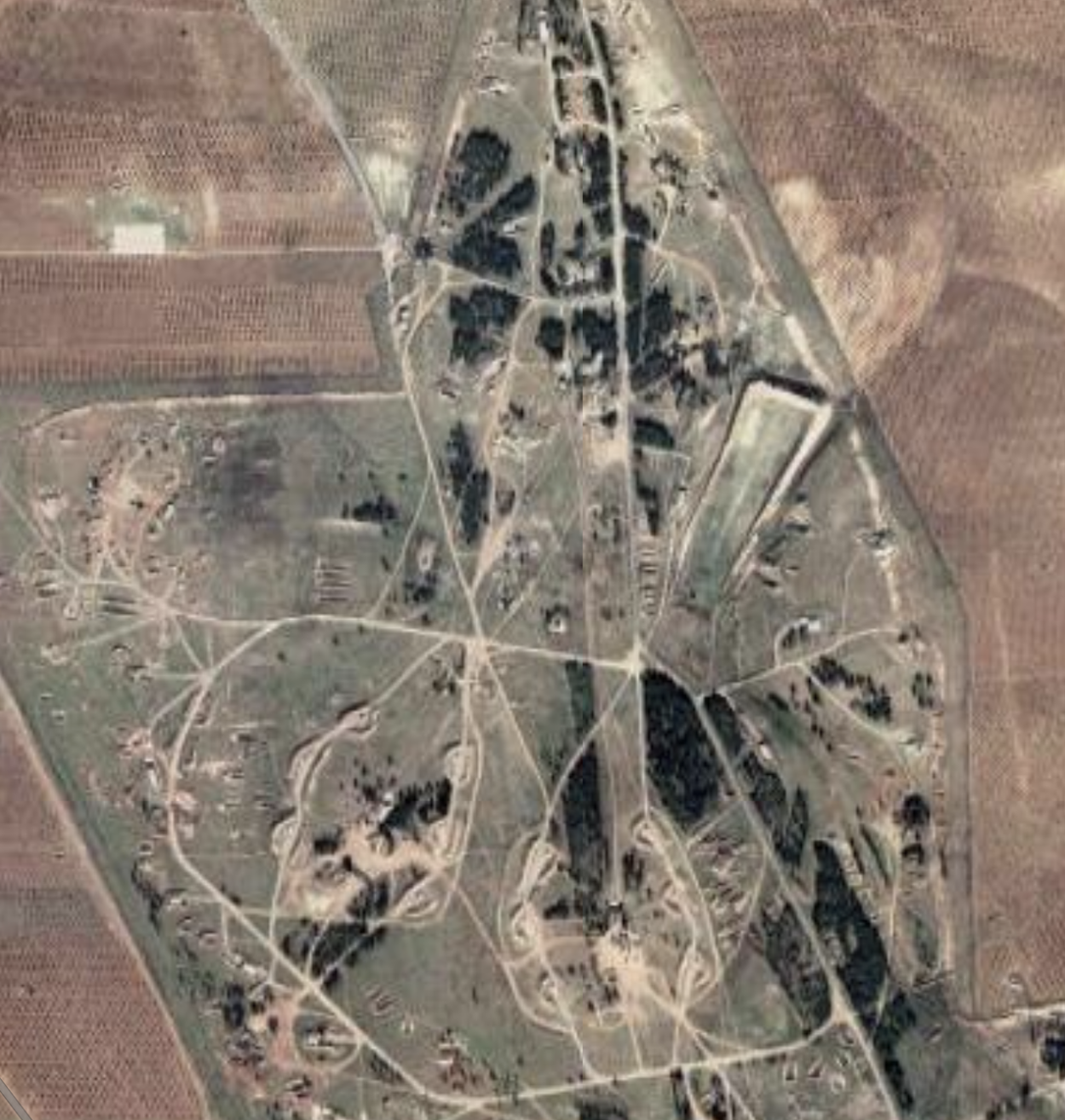 by using Google Maps you can also find a lot of current Russia air force bases and military units. while european NATO air bases are typically pixelated on the available satellite images, Russian ones are well represented. you can find MiG 31s, Tu-160 bombers and also the latest Russian Su-57 fighters: 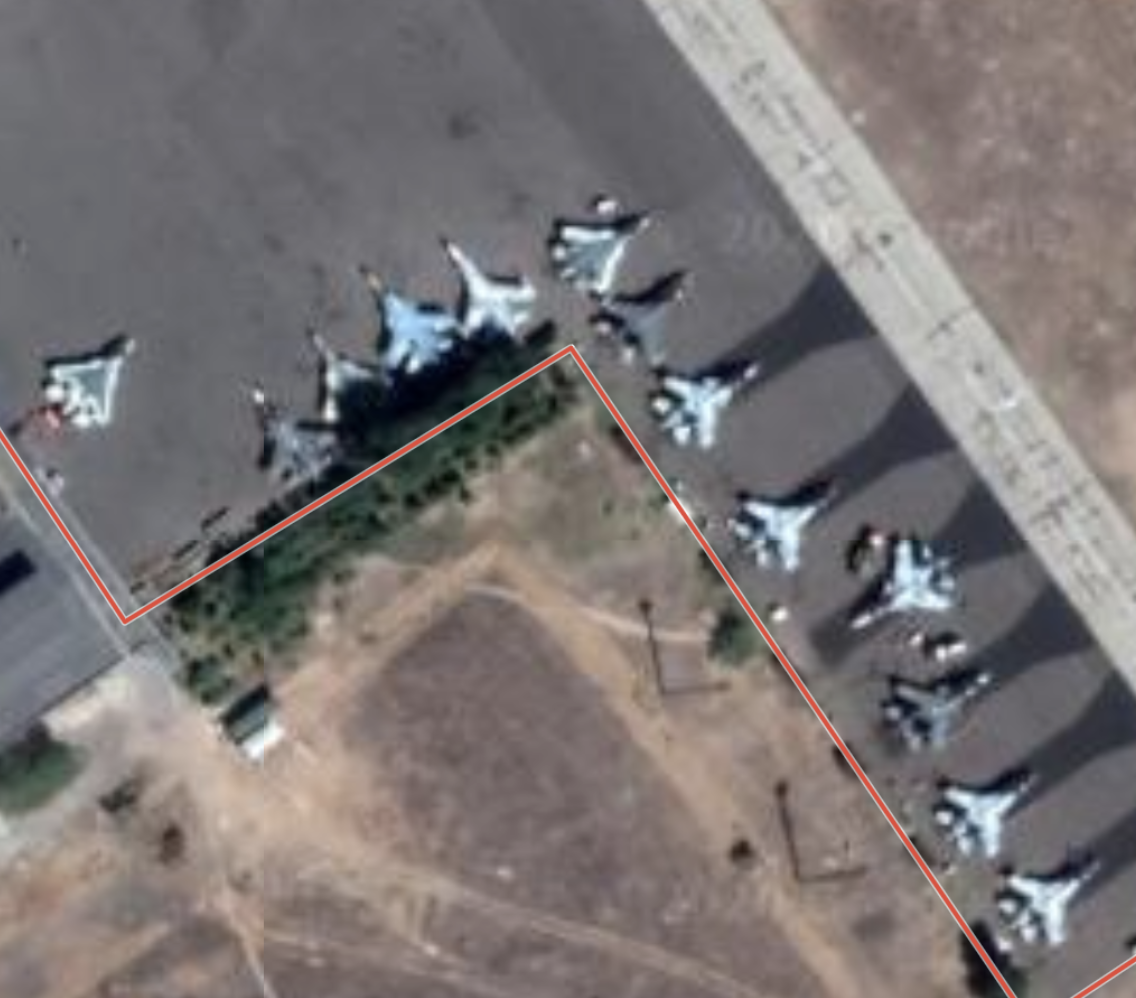 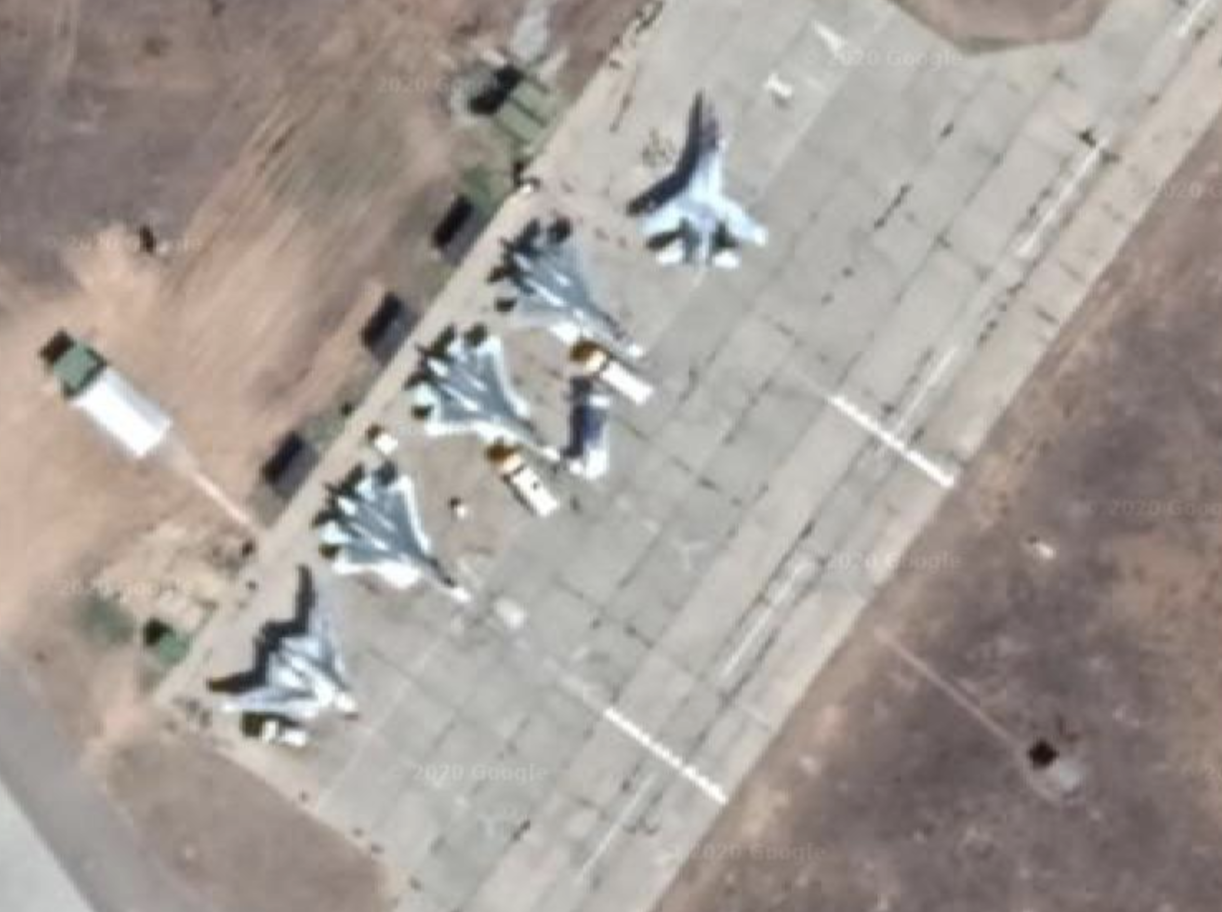 if you are wondering at this point how it happened that the Russians allowed themselves to be photographed with such equipment - don’t. both sides of the old conflict are well trained on tracking military and civilian satellites, knowing what and when will they pass over their heads or in the vicinity. Putin’s entire trip to this airport was a huge PR show (including the “escort” of the presidential plane), because it would once again show his own citizens how strong and professional the Russian armed forces are. in this regard, nothing has changed since the times of the Soviet Union - carefully selected, best copies of given equipment are shown with a lot of publicity suggesting that it is only a “sample”, while most often it is the entire available and operationally ready force available.

BTW, there’s developing story on how thieves stolen radio equipment from Russia “doomsday” plane - Il-80. those are specially built (right now only 4 active) to provide survivability after all-out nuclear war, and should be guarded even if undergoing maintenance. it speaks a lot about security level of Russian military and maintenance installations.

going back to satellite photos - here you can find Petropavlovsk-Kamchatsky Airport and AFB with interesting photo artefacts: 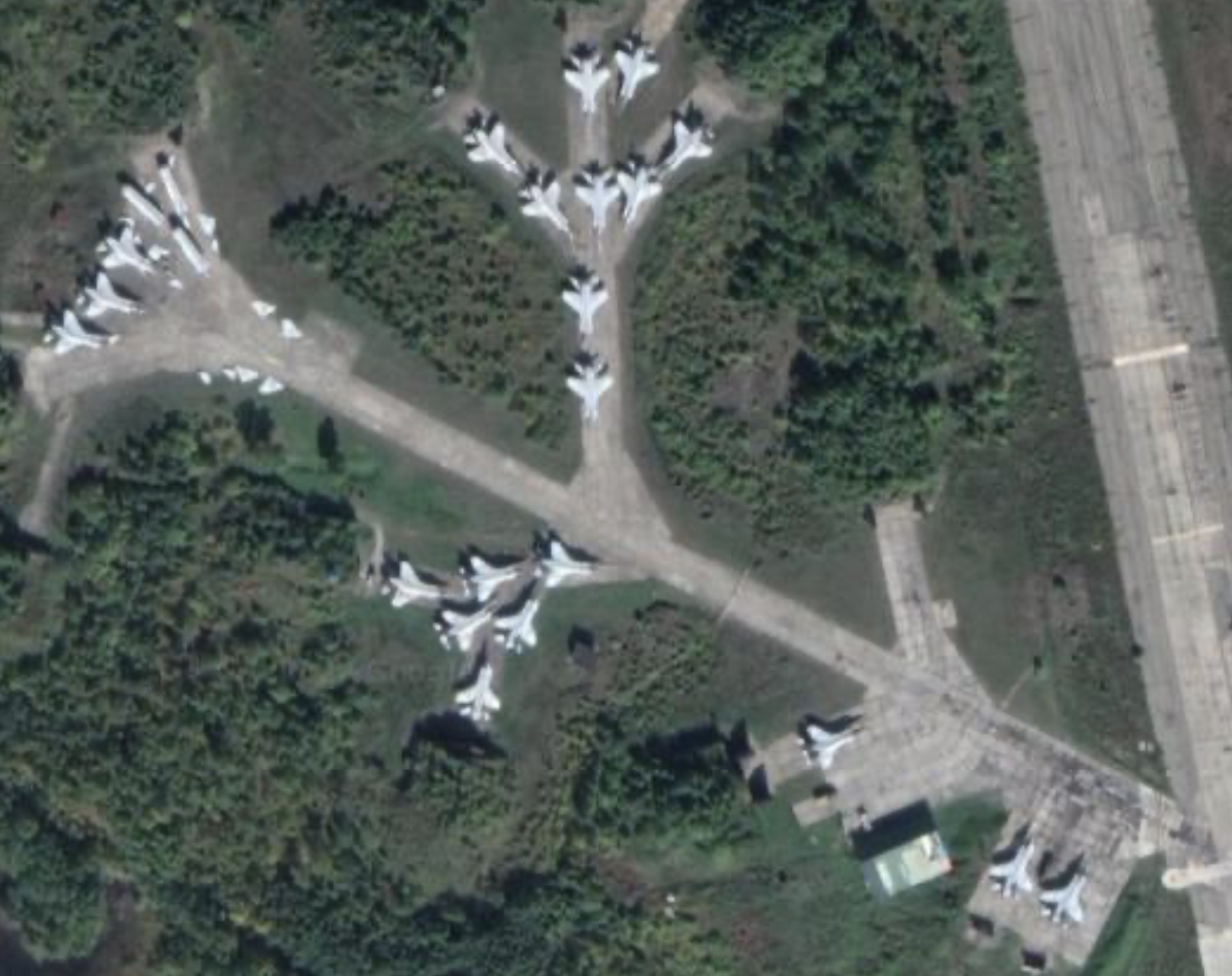 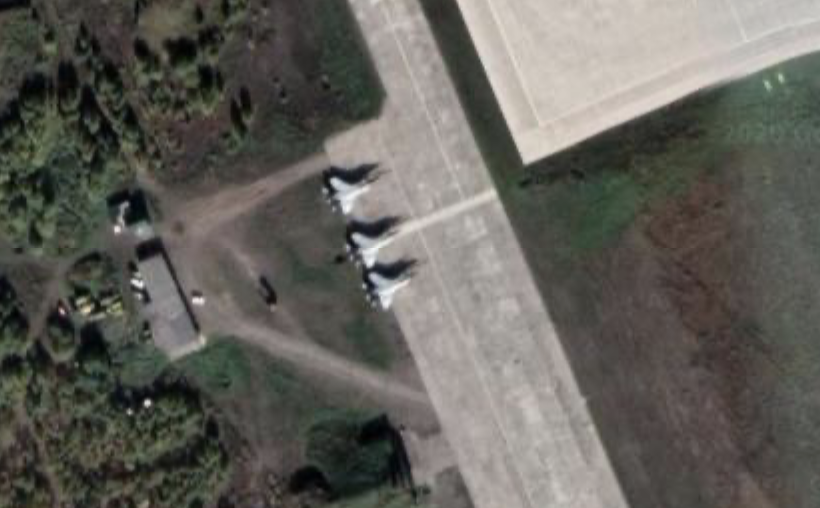 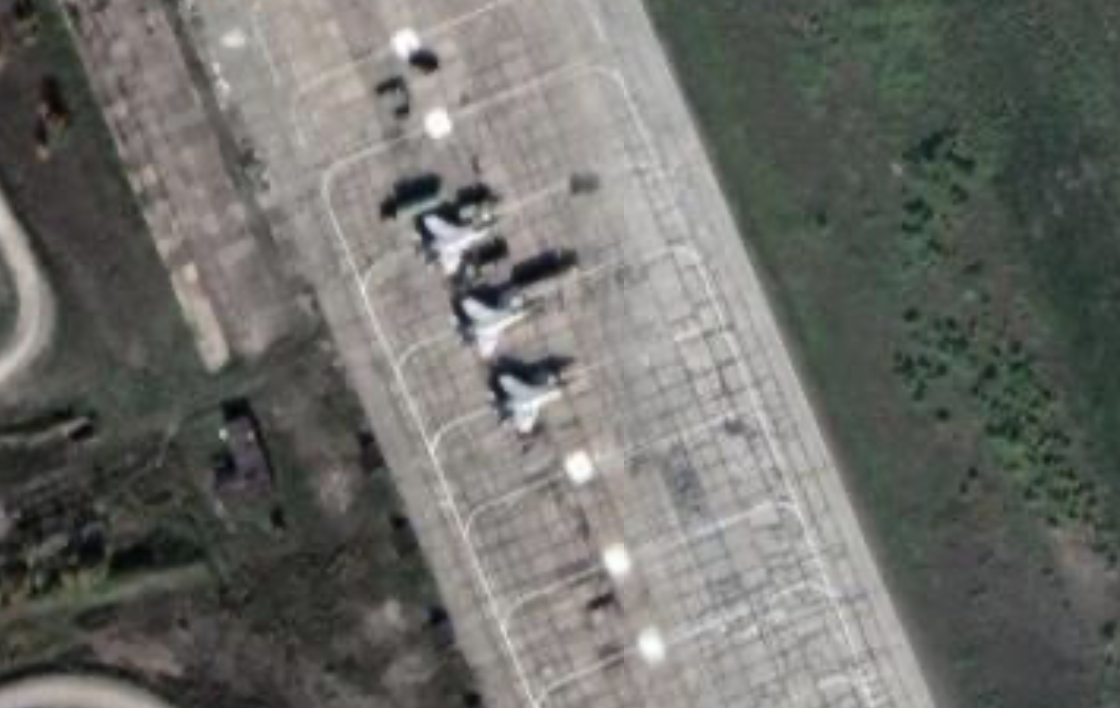 if you want to continue searching for military installations and airfields, here’s another bunch as a starting point:

Jaruzelski, Kukliński and other interesting pieces

the CIA archive also includes other interesting information about the Warsaw Pact and NATO, including those from the period 1980-1990. you can find there for example assessments of CIA analysts who, based on electronic reconnaissance and satellite photos, actually identified the transfer of part of the Soviet troops to Poland before the introduction of the Martial Law in 1981. this may add credibility to General Jaruzelski’s claims about an intervention similar to that of Hugary in 1956 or Czechoslovakia in 1968 if “you can’t stabilise situation in your own country quickly enough”.

Colonel Kukliński also added his part, being the source of some of the data, including operational plans of individual groups of troops as well as training and field exercises plans. interestingly, these plans consistently emphasized “defense against NATO strike, mobilization and counterattack within 4 to 8 days” … always underlining the “defensive” nature of any conflict in which the Warsaw Pact was to be involved.

Corona, Zenit and others 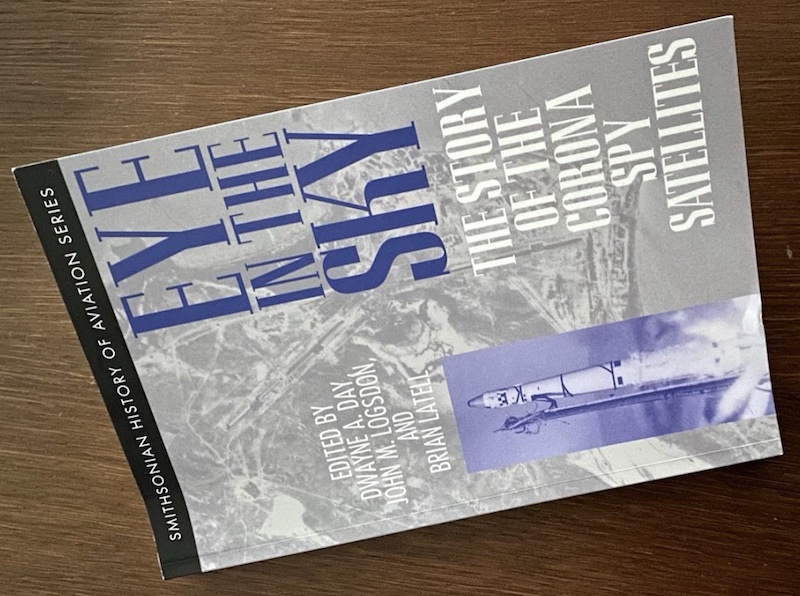 and here we come to the second book - Eye in the Sky. honestly, I expected more from this item. if you are reading these words today, I don’t believe you have to have it - especially if you have limited shelf space. it is definitely better to rummage through the available FOIA CIA archives, because you can simply find more and detailed information about both Keyhole satellites (Corona program and later) and Russian satellites from the Zenit series. while the Russians have won the space race, it looks like they have lost the space intelligence race. BTW, recent news indicating the loss of an important research and development center in Ukraine and delay in launching Russian satellites may indicate that Putin’s empire, which is still under threat from the economic crisis, has serious problems with keeping this type of its army in readiness. flexing muscles in 4k on YouTube will not change anything here;) what’s worse, recent SpaceX successful manned launches led to series of bitter, frustration-fueled tweets by head of russia space corporation. by the way, he did it with a way typical for good old USSR propaganda times - by using old photos and suggesting those are actually new programs that will fuel russia ambitious space program.

therefore - fake news as a global phenomenon, “invented” and used on a large scale by Russians decades before Trump was elected president of the United States, is a topic that is difficult to ignore. in Poland, one of the active organizations trying to identify and catalog the activities of propaganda “trolls” is INFO Ops - kudos to Kamil!