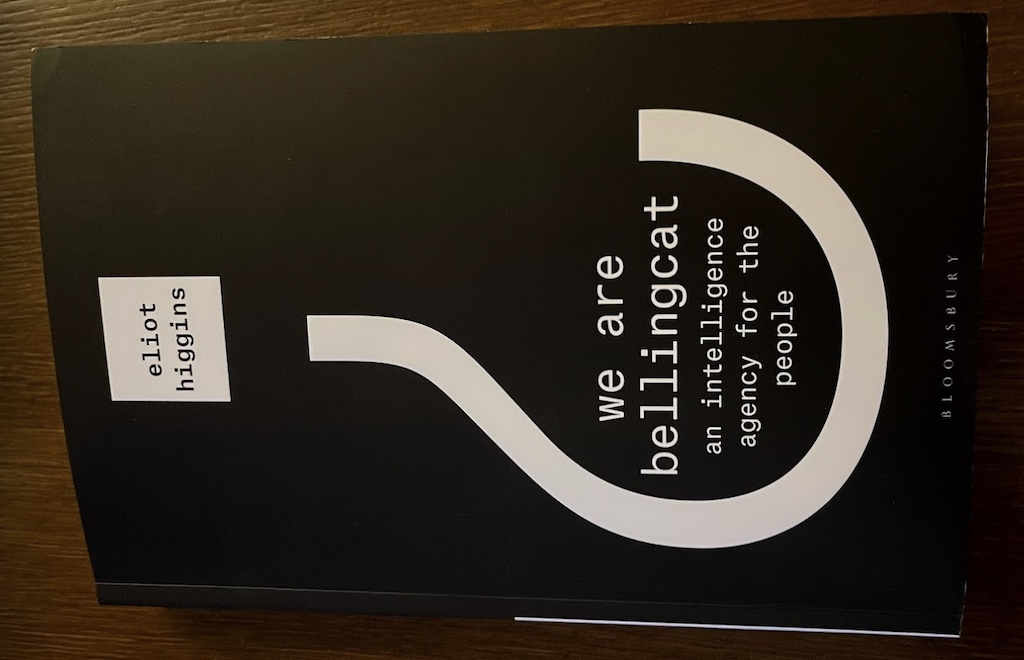 the book goes through his journey from the kitchen and internet connected laptop to the place Bellingcat is today (BTW, the name comes from the bell hanging from cats neck to warn out birds from becoming cats prey).

Bellingcat is both well organized “core” group of researchers and specialists that are trying to piece up together objective truth about specific events, but at the same time hundreds if not thousands of volunteers helping out in all investigations. and as you probably already know - they’re impressive.

from identifying russian murders, that shoot down MH17 flight over Ukraine, through russian GRU agents working undercover to “silence” one of his former agents in United Kingdom, to unmasking and exposing the lies of the al-Assad regime in the ongoing conflict in Syria. or, just to take on the West as well - journalist “culture” of living off “juicy” news information by press in United Kingdom. all of that just based on contacts and searching through the web using nothing more than browser and a few of simple tools.

as Stanisław Lem back in seventies, internet is great tool for science, education and knowledge storage just for the price of accessing the medium, but at the same time - mankinds filthy trash, in which every strangest concept or history distorted by a sick mind can find place and prosper. we are inundated with “fake news”, we are starting to watch fake or fabricated videos more and more often - and it becomes increasingly difficult to strain out what is relevant and true. on the other hand, the existence of such organizations as Bellingcat (they are not the only ones) allows us to hope that both large and small wickedness will not escape justice - on the other hand, it makes us also wonder what it is all about.

China has been working on an alternative to the current IP protocol for a long time. they laid only tiny layer of appearances to hide that they want absolute identification of everything and everyone. for what? just see what China is doing with religious or ethnic minorities and how much with regards to information flow they control already today. basically every totalitarian government - Russia, China, Turkey, North Korea, Myanmar and others - take seriously the freedoms (and therefore - dangers) offered by the Internet and tries to take control of it whenever it has an opportunity (there will always be opportunities and people willing to use them).

let me make a short digression, but staying on topic of this post in general.

the balance between freedom of speech and an aggressive dumpster created by demanding, self-adoring “influencers” or consciously produced “truths” is, however, an extremely difficult topic. this problem has not been solved in the last few decades, but let us not delude ourselves that technology alone will solve it. I know the technology, have been dealing with it for 25 years and so far it has not solved any problem by itself. as for the people using it - yes, we did.

the fall of standards that has been going on for years, which can also be observed in our very own country, is undoubtedly connected with the lack of education, but also with common sense and the ability to look into the future rationally. thinking about oneself but also about others, including the weaker (in every sense of the word). the only solution is education, which thanks to the Internet is literally at your fingertips today (of course, if you have the Internet and a device that will allow you to access it - which in Poland is still one of the basic problems of e-learning).

a sensible approach to processing news from the country and the world, decisions at the local level - with those “own”, conscious opposition to information noise and the said, thoughtlessly repeated, “retwitted” and “reshared” “news” is one of the most fundamental, very practical actions that anyone can take today.

a few years ago, I gave my two friends dealing with technology an idea (idealistic as always) to open another “social” portal, but focused only on practically verifiable, objectively true news. oh, how naive I was and how much I did not know yet about the difficulties of a moral and technical nature - problems that the giants of this market are being eaten by today. that’s what you have friends for, to take it easy but still try to discourage you from doing really stupid things.

of course, the problem itself remains - and the question of when and how we will manage to solve it (as a humanity). I believe in a utopia (perhaps built on the shoulders of a truly responsibly created AI), but for now, organizations like Bellingcat just have to exist to protect citizens from Governments and screen out falsehood from truth in a deluge of digital chaff.

definitely worth buying and reading, although the group’s website has much more detail about the individual investigations and cases that Bellingcat has dealt and is dealing with. the book can therefore be a break in the reading of collected and publicly available materials - or, if you do not know the group at all yet - an excellent introduction to this in-depth reading.