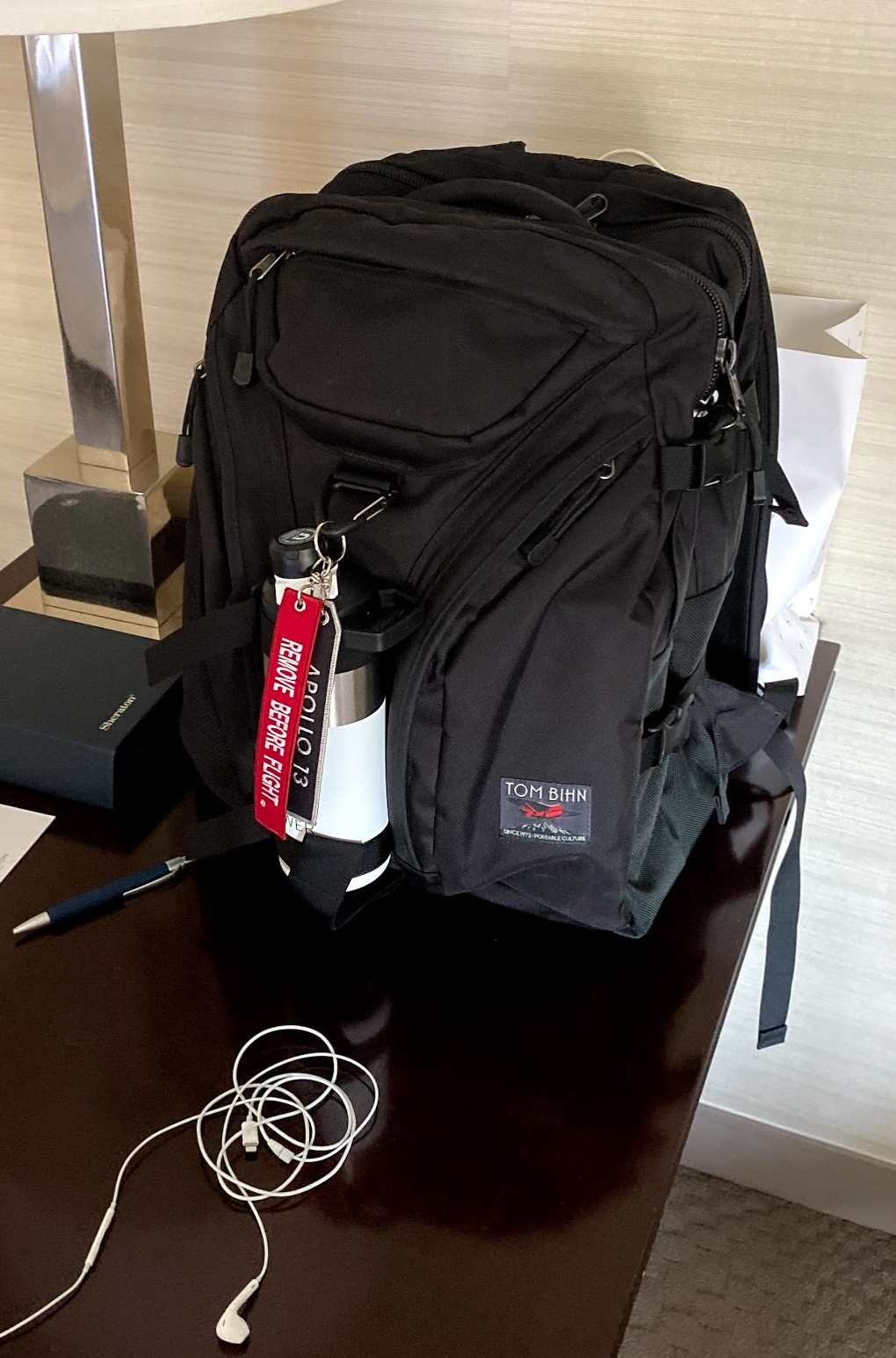 I’m covering some technology gadgets from time to time here when I’m really happy with them. for example, a while back I covered Bose QC 35 wireless headphones (and the fact that somehow I stubbornly resisted against them while spending days flying - thanks Gaweł!). and you know perfectly well that I’m covering FreeBSD pretty often, just like some of our very own, Cisco products and technologies ;)

but the reason for the post was realisation, that when we’ll get back to travelling, we - technology geeks just love to have stuff with us. of course, having backpack is so very “not-executive”, but if you know me at least a bit, you know how little I care about titles or appearances. what’s more important, I always valued physical work - so after endless hours at meetings, presentations, playing with spreadsheets and generally taking over the world I just loved to immerse myself in small (or not so small) “hacking”.

you wear your backpack daily#

over the years I was using very good backpacks built by Swiss company Wenger. can’t say anything bad about them - they look great and are often used as source for SWAG with vendor names/logos on top of them. unfortunately, as I learned over time - they were wearing out after about year or two in two critical places - at the bottom and with the upper handle. strands of material don’t look good, even for a person so much detached for physical appearances like me.

during my travel to US I decided therefore to invest in backpack recommended on many travel forums from Tom Bihn company. Tom was a pilot and the whole concept of using durable backpacks and bags was born out of his issue with what was available at that time on the market. as shipping to Europe was prohibitive, I ordered backpack while in US to my hotel room. the photo illustrating this post is actually from this very hotel room, and my backpack was like two-hours new at the moment when it was taken. it’s a Brain Bag, you can see video from review here or here.

what geek has in his backpack?#

I’m that type of a person that wants to be prepared and not ask or rely on other people to do its job. last 21 years of travelling all around the world and doing all kind of different things, including speaking at conferences just gave me that “wisdom”. not to mention spending time at various colocation facilities.

obviously, there’s laptop. back in the days of working as presales engineer I was travelling sometimes with two or even three, but those days are gone.

then, there’s power brick for laptop - the one used for laptop charging is usually located in main transport part. I typically carry two or three universal USB-A/USB-C power supplies as extras - thanks to some standarization efforts by EU it becomes easier and easier to keep all of your equipment charged (well, if you ignore interesting ideas from Apple or Gartner with their watches).

so, there’s separate pouch with cables and those extra power supplies.

then, there’s universe of converters. once I moved to MacBook with USB-C as my main platform, I have with me at least two different USB-C to HDMI/USB-A/SD converters, and then dedicated converter for VGA and to HDMI. then, there’s USB-C to Ethernet converter somewhere just in case (colos rarely offer WiFi ;) ). of course, because I’m iPhone user, there’s bunch of USB-A/C/Lightning cables of varying length. I can highly recommend Anker products.

as I’m usually presenting, there’s also laser pointer. I become hostage of Logitech. there’s obviously whole set of cheaper laser pointers, but believe me - if you’re travelling often, giving 3-4 presentations a day, going cheap will cost you. here, at Cisco Poland we somewhat standarized around them, and after bigger events like Cisco Forum people were often ending up with mixed or missing ones ;) old days.

next useful gadget are markers for whiteboards. you can typically found whiteboard when at Customer meeting, but often existing markers are dry or barely visible - invisible or barely visible drawing doesn’t work ;) I use and highly recommend Staedtler markers. on top of that, there’s roll of insulating tape with me - black and some other color. you know - for stuff, like marking some equipment temporarily, catch some cables or - yes - isolation ;)

front-end pouch holds my multi-tool - I’m using Leatherman (it’s a present), but there’s also dedicated folding knife there - made by Zero Tolerance (also present by the way). knife is typically better if there’s some serious stuff to do with cables - and if you’re trained long enough (really, can’t stress this more enough!) it’s useful for self-defense as well.

next to it (or on the opposite side), there’s one or two power-banks. given we have new ones with USB-C charging capability, you can use them also to charge your laptop as you go. it’s also useful if you’re travelling with kids and their phones and tables. again, I’d highly recommend Anker and highly recommend against using “noname” or knock-offs of popular brands. nothing ruins the day (or night) as being burned by your battery, or needing to evacuate hotel in the middle of the night.

next bigger thing that goes into main transport part are noise cancelling headphones. I’m still using Bose, but right now newer model - QC700. they can’t make proper external speakers somehow, but they produce fine noise cancelling headphones. recently I was using also Sony WH-1000MX4 for some time and I can highly recommend them as well. they seem to offer a bit better sound when listening to the music, but it may be just me.

for my Brain Bag I also have separate, dedicated pouch for iPad Pro - it’s much better to use than not having anything at all to cover it.

then, there’s separate small bag for external mouse and USB-C hard disk drive that holds my most important files and Mac backup. of course, I also carry bunch of USB keys with me “for numerous use cases”. if you’re looking for specific brands - I found Sandisk to be very reliable, but rather slow. I’d recommend using Corsair, Transcend and Samsung which also makes suprisingly good ones. on the USB keys I use app called Ventoy - it enables you to boot from it and then use existing ISO files to boot different OSes and tools. just bunch of 128/256/512GB USB keys will therefore enable you to setup offline some OSes, restore VM snapshots or in case of apocalypse (like ransomware) - setup whole DC from scratch.

it may seem to be a lot - and you may be right, but I got used to it over the years. the fact is also that I drive/fly much often than walk, so it’s not such big issue anyway. truth is backpack capacity and versatility (as well as its strength and durability!) is simply impressive.

on the post opening photo you can see this exact backpack that has everything I mentioned above inside, as well as couple of physicall books (hardbacks), some company gadgets and family presents from dads trip to US (in their original packaging!).

of course, depending on trip type, there will be different things inside as well. for example, sometimes there are screwdrivers there (well, to my great suprise I managed twice to smuggle 15cm Philips screwdrivers to UK - this should tell you something about security screening on airports…) but also patchcords, plastic bands, SFP modules… stuff.

for example, for family trips I usually take my mobile hotspot - Netgear M1. it has ability to connect external antenna which works wonders in isolated places (like mountains for example).