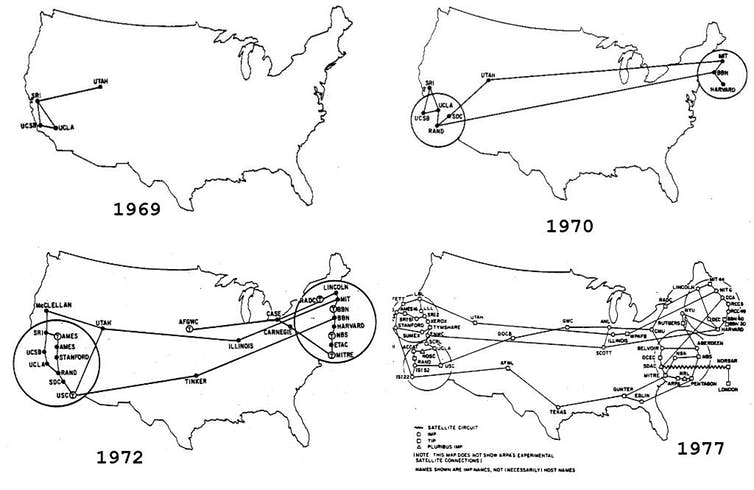 it was not built for US military.

it wasn’t even built to enable survivability of US military infrastructure after nuclear war.

there’s a myth in the “internet circles”, that i’m fighting for couple of years already. recently, i was reading great book - Dream Machine. it’s as good as (at least) Dealers of Lightning or 747 - but maybe even better.

you probably heard the story already - US gov ordered RAND to check if they could built survivable comms system. that system could have survived almost total annihilation - including nuclear war. RAND asked one of his consultants - of Polish origin - Paul Baran to do the job. and he basically prototyped with his team network capable of packet switching, not circuit switching. it is said and repeated, that Paul work was in effect ARPANET. almost everything here is true, apart from last sentence - ARPANET was neither inspired or created thanks to Paul work.

while indeed Paul mentioned in Reliable Digital Communications Systems Using Unreliable Network Repeater Nodes about military use of the new concept (he even build the prototype), his work for RAND was not immediately available to people that were creating ARPANET. in fact, it was third simultaneous concept of building packet switching network - second one was originated in UK. Paul actually even confirmed that in e-mail to Donald Davies. they both meeting together in Gatlinburg in 1967 were discussing this and shared news with Americans working already on baby ARPANET:

Meanwhile, Scantlebury had told Roberts one other thing in Gatlinburg. While the NPLers were doing their homework, they had come across the work of an American who had - again - invented the packet network independently. Baran was his name (pronounced to rhyme with “Sharon”) - Paul Baran, out at RAND.

Oops. Roberts knew Baran slightly and had in fact had lunch with him during a visit to RAND the previous February. But he certainly didn’t remember any discussion of networks.

How could he have missed something like that? As soon as he got back to the Pentagon, Roberts dug out the office copy of Baran’s final network design, which had been circulated as a RAND report in August 1964, just before Robert’s on shift to networking. The “report” proved to be a small library […] Reading through it, Roberts found that Scantlebury was right. True, his plan and Baran’s did have many differences in technical detail, stemming largely from the fact that Baran had put more emphasis on digital voice communications than on computer communications. Moreover, their motivations were very different. Whereas Roberts was designing a civilian network that would connect the ARPA research centers, Baran had been after a nationwide command-and-control system that could survive a thermonuclear war

and here’s another one interesting quote, that i wasn’t aware of - Paul Baran with his team recommended (!) to share this technology with USSR, to balance the risks on both sides:

The motivation was not to improve the Pentagon’s ability to fight such a war, but rather to lower the likelihood of its having to. Vulnerable communications systems were highly destabilizing, went the argument: a commander in chief who feared the sudden loss of communication would feel obliged to fire off every weapon he had at the first sign of attack, lest they quickly be rendered useless. Conversely, a commander in chief blessed with survivable command and control could afford to wait it out, see what developed, and make some effort at a measured response. Indeed, Baran and his colleagues even advocated sharing the packet-switching technology with the Soviets, on the grounds that having survivable communications on both sides would be the most stable configuration of all.

well, his ideas at that time (1962-1964) were killed just after creation, by engineers working with traditional telecommunication networks:

So why hadn’t Baran’s plan been adopted already? Because it was too far ahead of its time, apparently. AT&T engineers, most of whom had spent a lifetime perfecting their circuit-switching networks, found Baran’s packet-switching concept ludicrous (“Son”, Baran remembers one telling him with exaggerated patience, “this is how a telephone works…”). Worse, Pentagon politics dictated that the network would have had to be implemented by the newly organized Defencse Communications Agency, which was also staffed by old-line telephone engineers and which simply did not have the technical competence to pull it off.

US military was doing fine at that time with point to point communication, spanning radar early warning sites across US, Alaska and Canada. military also decided that packet switching networks are not ready for prime time.

“The best way to develop the network for the Defense Departament was to develop it for the IPTO guys.” […] “So, how do you build a technology like this?” […] “Just build some phony terminals and send dummy traffic around? That’s pretty stupid. You don’t really test a network until you have real users. But who? You aren’t going to have real military users fidding around with this stuff, because they’re too busy doing real missions to worry about testing things for ARPA. Oh! Brilliant management move! We will use our principal investigators. They will generate a lot of traffic. They will do all the screwball things real users do. And they have a lot of motivation to solve all the problems, because their operation is going to be enhanced. So it’s really a very interesting bootstrap managemenent scheme.”

so, the ‘higher-ups’ bought it, and ARPANET could grow - IMPs were kind of expensive boxes, and telco connections between them were even more cumbersome and costly:

Rechtin and the higher-ups bought it. At a time when most other ARPA offices were being cut, restructured, or spun off-ballistic-missile defence was finally transferred to Army in 1968, instantly cutting ARPA’s overall budget by half - IPTO’s budget steadily, miraculously kept rising. By the end of the decade it would stand at something like $30 million a year.

The ARPANET was not started to create a Command and Control System that would survive a nuclear attack, as many now claim. To build such a system was, clearly, a major military need, but it was not ARPA’s mission to do this; in fact, we would have been severely criticized had we tried. Rather, the ARPANET came out of our frustration that there were only a limited number of large, powerful research computers in the country, and that many research investigators, who should have access to them, were geographically separated from them.

so… neither in plans or theoretical discussions, APRANET was created to take care of providing US military communiation capabilities. actually, military was not interested in ARPANET until 6th node was started (in other sources - 8th). funny enough, it was not to insert military content into ARPANET - but actually use academic centers CPU power for computational tasks. only in 1984 US military decided to build their own part of ARPANET - and MILNET was born, changed later on to DDN, and then in NIPRnet.